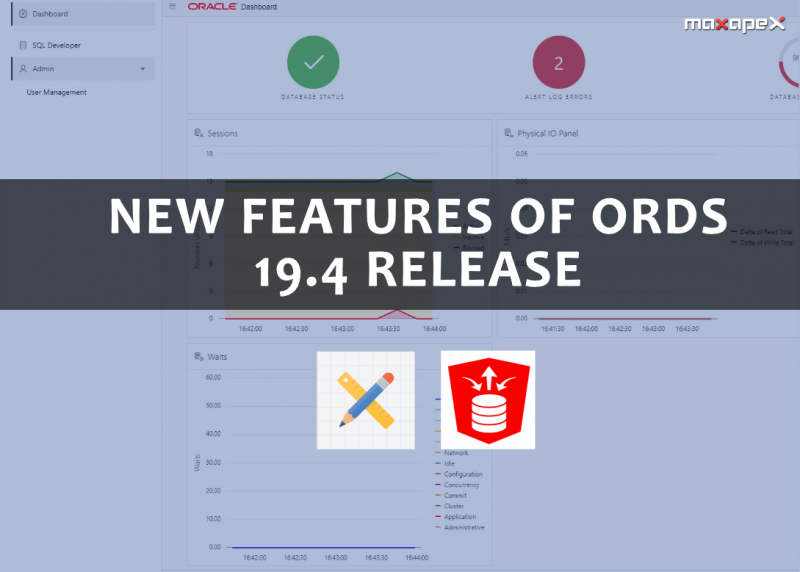 Oracle REST Data Services (ORDS) 19.4 is released just after version 19.2.0. The reason behind not releasing any version 19.3 is that basically this version was primarily focused towards the internal improvement of Oracle cloud. So, there was no reason to release it for the public.

In this article, I’ll discuss some significant enhancements that were introduced in ORDS 19.4.

Java 7 is No Longer Supported

Java is a continuously evolving language that adds new features according to modern world needs and fixes any identified bugs or security vulnerabilities with every new release.

As you may know that Java 7 is an old version that is officially announced as no longer supported. So, it is highly recommended to use the latest version of Java or simply upgrade to Java 8 because ORDS 19.4 will not work with Java 7.

In previous versions of Oracle APEX, we had the ability to generate and export PDF files using the functionality provided by Apache FOP (Formatting Objects Processor).

But in ORDS 18.4.0 release, the developers had advised to not use it due to its limitations. They also marked it as deprecated, which allows them to remove it in future versions of Oracle Application Express and ORDS.

In ORDS 19.4, they have removed Apache FOP but if you still want to generate, export or print PDF reports then don’t worry, because APEX Office Print (AOP) is there to help you out. This solution is completely integrated with Oracle APEX and offers a lot more features than Apache FOP.

A minor change is added in the working of “install” and “setup” commands of Installer. Now you need to use the –saveParameters option to update ORDS parameter file while using “install” or “setup” command.

Previously the process was automatic, but this change provides more control and flexibility. So, now we can decide whether to save parameters or not based on our specific requirements.

Basically we are allowed to remotely execute our SQL queries, get an overview of analytics reports using Performance Hub, view database activity log or history and even create or modify a complete database.

To access the newly added SQL Developer Web, you need to add two properties in default.xml file. These properties are mentioned below:-

Now you can use something like below URL format to open your SQL Developer Web interface. Don’t forget to replace YOUR_SERVER and YOUR_PORT with your actual server information.

When you have a large user-base that is interacting with your application then in those circumstances performance is the key to success or failure.

A minor boost in performance may show exponential results. So, keeping in mind the requirements of end-users, Oracle engineers and developers changed the way how ORDS handle connections of proxied database.

In previous versions of Oracle REST Data Services, a database connection is only opened when needed and then closed again after performing required task. According to developers, this behavior is also known as “Disposing” a connection.

From ORDS version 19.4 and onwards the default behavior of connecting with a proxied database is changed. Basically instead of keep opening and closing a connection now they place it in a pool and use it whenever needed.

The new method of database connection has really improved the performance of enterprise-level applications.